Torrential rains have triggered devastating floods and landslides across East Africa in recent weeks, aggravating an already challenging situation as countries in the region battle the coronavirus pandemic.

The destruction caused by the heavy rainfall has killed hundreds of people in Kenya, Uganda, Somalia, Rwanda and Ethiopia and has also forced hundreds of thousands from their homes.

This week, officials in Kenya and Rwanda said nearly 200 and 65 people had died in both countries, respectively, with floodwaters and mudslides destroying houses, washing away bridges and straining critical infrastructure.

Health experts are worried about the implications of the flooding on the countries’ response to the coronavirus pandemic.

“The displaced people have been forced to congregate in makeshift camps with the risk of banding together exposing them to the possibility of contracting the virus.”

Floodwaters also recently swept away most parts of an entire small town in Somalia and swept away roads, bridges and a hospital in Uganda.

Heavy rains flooded areas around Mountain Rwenzori in western Uganda after Nyamwamba River burst its banks, forcing people to seek refuge in nearby schools and destroying roads and bridges, according to officials.

“What complicates the matter is that this is the era of COVID. People are expected to maintain social distance, but how do you maintain distance in such a situation?” Julius Mucunguzi, spokesman for the prime minister’s office, was quoted as saying by the Reuters News Agency.

One of the hospitals in the area, Kilembe, was also washed away despite being built on a raised bank and reinforced with sandbags.

“There are wards which were completely washed away. The mortuary was swept away. You wouldn’t know that once upon a time there was a mortuary there. The drugs and drug stores were washed away,” Mucunguzi said. 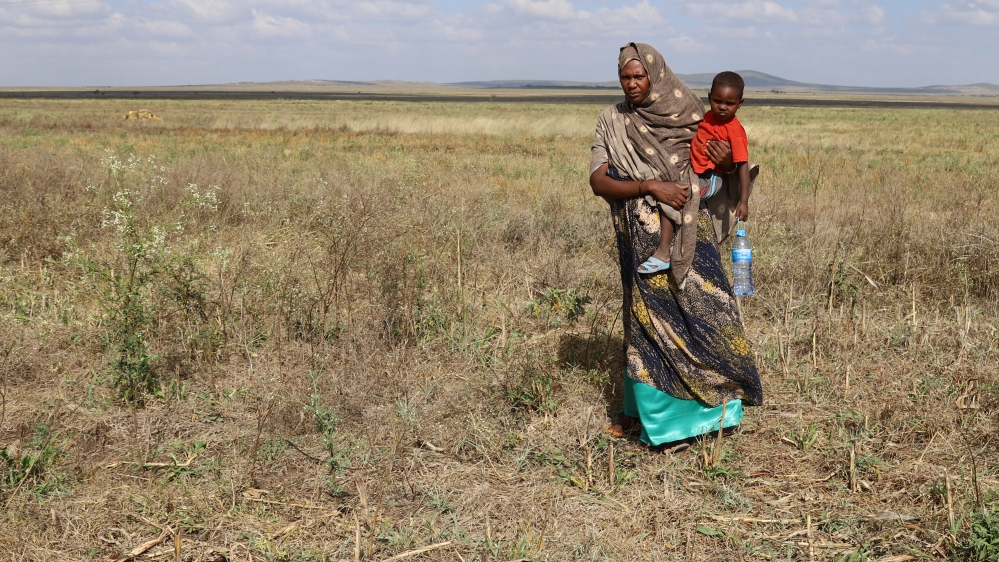 A displaced Ethiopian woman carries her youngest son in her wheat field that was damaged by heavy rains and desert locusts in the outskirts of Tuli Guled, Somali Region, Ethiopia [File: Giulia Paravicini/Reuters]

The Somali region in eastern Ethiopia has also been hard hit by the floods, with more than 100,000 people displaced, the United Nations Office for the Co-ordination of Humanitarian Affairs said.

Meanwhile, an unspecified number of people were killed in the semi-autonomous Puntland region in Somalia when flash floods swept away most buildings in Qardho town, officials said.

The heavy rains stem from moisture dumped in the region by winds coming in from the Indian Ocean where temperatures have risen in recent months, said Chris Shisanya, a professor of climatology at Kenyatta University in Kenya’s capital, Nairobi.

“This is a carry-over of what we had last year,” he said, referring to floods and landslides in the region.

The floods are coming as swarms of locusts are wreaking havoc across East Africa where millions of people struggle for food.

Their breeding has been spurred by one of the wettest rainy seasons in the region in four decades.

Outrage as Three Endangered Giraffes Electrocuted to Death in Kenya

Will Fela Be First African Artist inducted At Rock Hall of Fame?